The Rhetoric About a “Decline” in Religious Liberty Is Good News for Americans
By Marci A. Hamilton

Mandatory Vaccination and the Future of Abortion Rights
By Michael C. Dorf 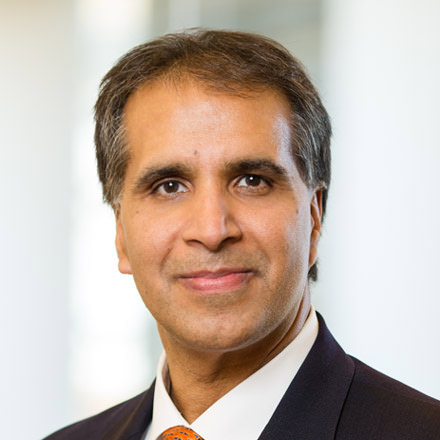 Vikram David Amar is the Dean and Iwan Foundation Professor of Law at the University of Illinois College of Law on the Urbana-Champaign campus. Immediately prior to taking the position at Illinois in 2015, Amar served as the Senior Associate Dean for Academic Affairs and a Professor of Law at the UC Davis School of Law. He has also had teaching stints at three other law schools affiliated with the University of California: the UC Berkeley School of Law; the UCLA School of Law; and UC Hastings College of the Law.

He received a bachelor's degree in history from UC Berkeley and his JD from Yale, where he served as an articles editor for the Yale Law Journal. Upon graduating from law school in 1988, Dean Amar clerked for Judge William A. Norris of the United States Court of Appeals for the Ninth Circuit, and then for Justice Harry A. Blackmun of the United States Supreme Court. After that he spent a few years at Gibson, Dunn & Crutcher, devoting half of his time to federal white-collar criminal defense and the other half to complex civil litigation. It appears that Dean Amar was the first person of South Asian heritage to clerk at the U.S. Supreme Court, and was the first American-born person of Indian descent to serve as a dean of a major American law school.

Dean Amar is one of the most eminent and frequently cited authorities in constitutional law, federal courts, and civil procedure. He has produced several books and over 60 articles in leading law reviews. He is a co-author (along with Akhil Reed Amar and Steven Calabresi) of the upcoming edition of the six-volume Treatise on Constitutional Law (West Publishing Co., 6th ed. 2021) pioneered by Ron Rotunda and John Nowak, as well as the hardbound and soft-cover one-volume hornbooks that derive from it. He is also a co-author (along with Jonathan Varat) of Constitutional Law: Cases and Materials (Foundation Press, 15th ed. 2017), a co-author on multiple volumes of the Wright & Miller Federal Practice and Procedure Treatise (West Publishing Co. 2006), and a co-author (along with John Oakley) of a one-volume work on American Civil Procedure (Kluwer, 2008).

Justia columnist and U.C. Davis law professor Vikram David Amar completes his two-part series of columns on two key decisions from the U.S. Court of Appeals for the Sixth Circuit. His last column focused on the Circuit’s Obamacare ruling; this one focuses on the Circuit’s ruling on an issue relating to affirmative action. Amar describes two different lines of Supreme Court precedent that offer different ways of analyzing affirmative action cases, and considers the possibility that the Court will take the opportunity—by reviewing this or another lower-court decision—to clean up apparent tensions between these two lines of High Court cases.

Justia columnist and U.C., Davis law professor Vikram Amar begins a two-part series on two important recent rulings by the U.S. Court of Appeals for the Sixth Circuit, both of which may end up before the Supreme Court. In this first column, Amar comments on the Sixth Circuit ruling that upheld Obamacare—citing a number of factors that make the decision noteworthy. These factors include a conservative judge's vote to uphold Obamacare; that same judge's use of broad reasoning in doing so; the fact that the dissenter was a district court judge; the decision's timing; and the arguments the two judges in the majority could have made, but declined to make, in support of the statute.